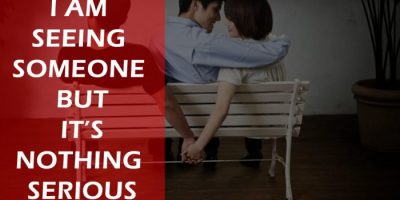 This morning as I was perusing twitter, I came across this article; I read it and it made so much sense, so I decided to copy it; so you guys can benefit from it. It’s from larakudayisi.com; Mrs Lara is a matchmaking expert; kindly do check out her website.
In this age, the theory of “I am seeing someone but it’s nothing serious” is common when you are about getting into a relationship. Some people even say, it’s no big deal because you can’t expect a grown man or woman not to have a boyfriend or girl friend at any point in time.
I would never understand this theory because I don’t understand why you are in a relationship and not expect anything serious from it. If you are a girl and a guy tells you he is in an unserious relationship while trying to ask you out, please RUN!!
This is a value issue and it would come to bite you in the ass later. How come he didn’t break it up before coming to you? How can a man or woman not be able to be alone If they can’t find a relationship that they want? Don’t you think It’s something that calls for some concern?
If you have to be with someone at every point in time just because, then we need to see for some therapy because you are hiding some insecurities and you are most likely validating yourself by the opposite sex. It has happened to me before when I was single and it is a very unpleasant place to be in. When you are at that point that you can never be alone, it’s time to seek help.
Be sure a man or woman is completely single before you say Yes to them or ask them out as this would save you some heartaches in future. You won’t have to deal with someone who is double dating or a disgruntled rival who doesn’t want to be an ex.
Dating someone who has another person shows you do not have a healthy self esteem because it shows you are settling to be a second fiddle when you are supposed to be the only queen or king to someone who truly knows your worth.
Lara Kudayisi-Emeralds