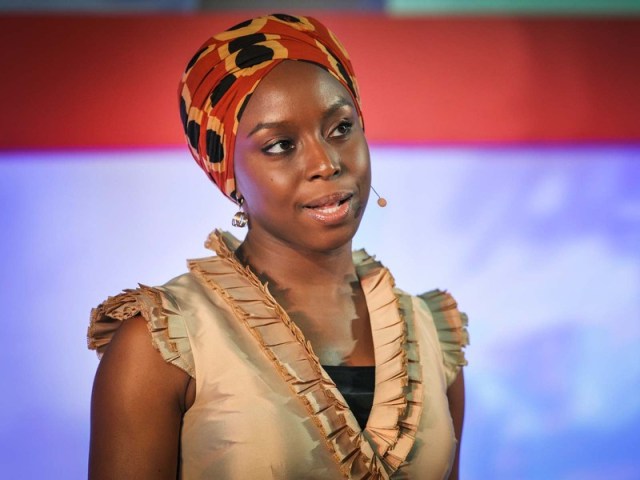 So what if before my Mexican trip, I had followed the immigration debate from both sides, the U.S. and the Mexican? What if my mother had told us that Fide’s family was poor and hardworking? What if we had an African television network that broadcast diverse African stories all over the world? What the Nigerian writer Chinua Achebe calls “a balance of stories.”
What if my roommate knew about my Nigerian publisher, Muhtar Bakare, a remarkable man who left his job in a bank to follow his dream and start a publishing house? Now, the conventional wisdom was that Nigerians don’t read literature. He disagreed. He felt that people who could read, would read, if you made literature affordable and available to them.
Shortly after he published my first novel, I went to a TV station in Lagos to do an interview, and a woman who worked there as a messenger came up to me and said, “I really liked your novel. I didn’t like the ending. Now, you must write a sequel, and this is what will happen …”
And she went on to tell me what to write in the sequel. I was not only charmed, I was very moved. Here was a woman, part of the ordinary masses of Nigerians, who were not supposed to be readers. She had not only read the book, but she had taken ownership of it and felt justified in telling me what to write in the sequel.
Now, what if my roommate knew about my friend Funmi Iyanda, a fearless woman who hosts a TV show in Lagos, and is determined to tell the stories that we prefer to forget? What if my roommate knew about the heart procedure that was performed in the Lagos hospital last week? What if my roommate knew about contemporary Nigerian music, talented people singing in English and Pidgin, and Igbo and Yoruba and Ijo, mixing influences from Jay-Z to Fela to Bob Marley to their grandfathers.
What if my roommate knew about the female lawyer who recently went to court in Nigeria to challenge a ridiculous law that required women to get their husband’s consent before renewing their passports? What if my roommate knew about Nollywood, full of innovative people making films despite great technical odds, films so popular that they really are the best example of Nigerians consuming what they produce? What if my roommate knew about my wonderfully ambitious hair braider, who has just started her own business selling hair extensions? Or about the millions of other Nigerians who start businesses and sometimes fail, but continue to nurse ambition?
Every time I am home I am confronted with the usual sources of irritation for most Nigerians: our failed infrastructure, our failed government, but also by the incredible resilience of people who thrive despite the government, rather than because of it. I teach writing workshops in Lagos every summer, and it is amazing to me how many people apply, how many people are eager to write, to tell stories.
My Nigerian publisher and I have just started a non-profit called Farafina Trust, and we have big dreams of building libraries and refurbishing libraries that already exist and providing books for state schools that don’t have anything in their libraries, and also of organizing lots and lots of workshops, in reading and writing, for all the people who are eager to tell our many stories.
Stories matter. Many stories matter. Stories have been used to dispossess and to malign, but stories can also be used to empower and to humanize. Stories can break the dignity of a people, but stories can also repair that broken dignity.
The American writer Alice Walker wrote this about her Southern relatives who had moved to the North. She introduced them to a book about the Southern life that they had left behind. “They sat around, reading the book themselves, listening to me read the book, and a kind of paradise was regained.”
I would like to end with this thought: That when we reject the single story, when we realize that there is never a single story about any place, we regain a kind of paradise.
CHIAMANDA NGOZI ADICHIE
I love you for reading, thank you for stopping by. If you have any thoughts, kindly drop a comment, I’d love to hear from you.